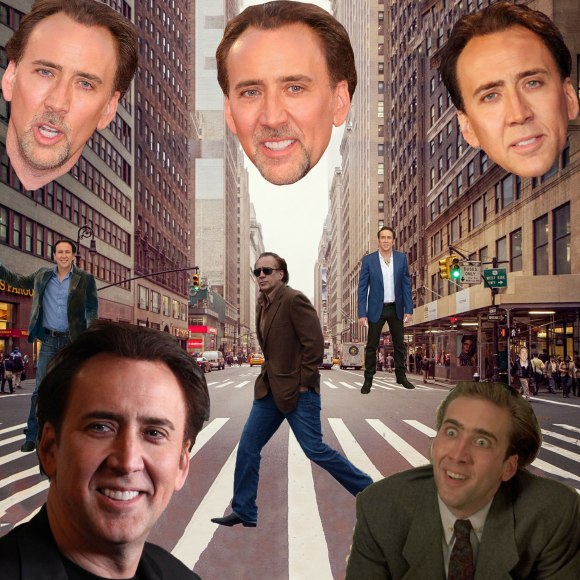 These are a few images I photoshopped together using the selection tools. I decided to make a few montages of the awesome Nicolas Cage and play around a bit to do some funny things.

This is something that I made using Photoshop. I took 3 pictures of myself and used filters to make them look kind of neat and unique. I placed them together using equal negative space and used different layers to get two backgrounds. This was me playing around with Photoshop.

The following contains spoilers and is an expanded summary of how I feel about Batman V Superman: Dawn of Justice by talking about the expanded Ultimate Edition. If you have not see this edition, you might want to before reading this review.

Yes, the Ultimate Edition is better. But not because it added more violence or action-oh no, in fact, it didn’t add anything like that at all. It’s because it added things that properly and helpfully explained things and filled in many plot holes in a satisfying way (not all, but a good amount). We now know why people kill those with the Bat symbol in the prison, we understand why Superman doesn’t like Batman, and we have a better understanding of how much power Lex Luthor has in this world, which is reminiscent of how rich, corrupt people run certain cities. I also liked Lex Luthor a little more this time around, I still think Eisenberg was miscast and a bit young to play this but, for what it was, it wasn’t bad. It’s been a few months since I have seen the Theatrical Cut, but here I only asked myself “why did this happen?” when Lois decided to throw the kryptonite spear in the water and then go get it even though she doesn’t know it’s useful. She was very pointless in that last scene. Still, in terms of plot structure and storytelling, that is my only real complaint, which is a vast improvement over the original version. All the additions I liked and I did not feel as though anything they added took away from the film or deserved to be cut out in the first place, rather I feel they add more interesting ideas and important story points.

It’s 30 minutes longer, but it flows a lot better. I remember thinking the original cut was very long and tiresome but here, it flew by and the story naturally went along. There is a real sense that these are two titans learning how to cope with a world that doesn’t realize they need them yet-or rather the other way around. Batman’s pain really comes through and I do love that this is about him finding the light in the most unlikely of places: Superman. That aspect is what sells the movie to me and I think is shown very well visually and through Ben Affleck’s performance. I think he studied Michael Keaton and learned the brilliance of Bruce Wayne is he bottles up all his pain and you can see it. Here, not only do you see that in Ben Affleck’s eyes, but it leaks out a bit due to him being older and, what he believes, wiser. He doesn’t see Batman becoming better, he doesn’t see the world becoming better and it’s drained him, so he is acting out, so much to the point that when he sees our future and the ray of hope, he can only see darkness and danger. That is how Superman was portrayed to me more in this film, but maybe that was the point. We see things more through Bruce Wayne’s eyes here. I like that a lot, but I wish we saw more from Superman’s side and though he does more Superman like things in this cut, I feel his side needed to be explored more (why does he never talk to humanity like Superman would?).

I never felt bored or tried, although that could be because I was watching it at the comfort of my own home than in the theater where you can’t pause it or turn down the volume. Many things make more sense and I don’t see many fans being disappointed, even though it’s not like other Extended Cuts where they throw a bunch of cut actions scenes verbatim. It’s all story moments and expanded subplots, which I liked. It draws me in more to this environment and makes me admire the spectacle, seeing these characters deal with their personal demons and horrors.

There are still some issues that stuck from  the original cut I saw back in March. What the Ultimate Edition does do is make me call this an objectively good movie. It’s a solid first attempt to bring all these characters together and is nowhere near a failure that many were calling the Theatrical Cut, but at the same time, I feel it does fall a bit short in places. I still don’t like this Superman at all, I feel he needs to smile more and I never really got why the people in this film liked him-if any, they focused way more on the people who hated him. He’s bland and brooding and I can’t get on board with him at all. I also applaud Zack Synder for his visual style and the look, which is superb. There are shots in this that are some of the best I have ever seen in a comic book film. Where he falls flat, though, is his reliance on using those visuals-and ONLY these visuals-to tell the story and it can only go so far. I wish Superman talked more and talked to humanity. We badly needed a scene here where he talked to humanity and said something like “I’m here for you” if you wanted to make him compelling and more like…well, Superman. He’s coming back for Justice League, so maybe next time? I don’t know, I don’t see that getting better, but there is always hope. (Despite that, I must say they did Superman’s death scene powerfully well. I was taken aback by how great of an impact that was and how visually drawing it was.)

Batman is still great and Ben Affleck does a great job. What made me give this movie a chance, even this 2nd time, was him, but it was more than that. I realized something. Even though we have had some great Batman films, we’ve never really gotten a Batman movie. Not really, because the fun of the animated series and the fun of the comics was seeing the world of Batman already set up. There was already Commissioner Gordon and Robin and all the villains out there…and especially after an added line near the end in this Ultimate Edition, what made me love this Batman and this world the most was the fact that he is older and there is a Joker out there and all these things are already set-up. I loved seeing villains team up and seeing that it was Hugo Strange or Penguin or The Riddler, or any of these great villains being the ones that screwed up Gotham-not just some random gangsters like the other movies did. This movie right here told me that that is totally open to happen now and most likely in the cards-and I love that. I can’t wait to see Ben Affleck’s Batman movie and to see more of the Gotham world.

Otherwise, my comments are the same basically. The end fight is still thrilling, Wonder Woman is awesome and this edition enhances many scenes so that they make much more sense (Holly Hunter’s character has more of a purpose here. The exploding of the U.S. Capitol had a purpose and made sense especially since this edition shows how Lex pits not only Batman and Superman against each other, but the world against them as well). Still, I think they can do better. If they lighten up a bit (or more than a bit actually) and have more fun with itself as well as not be afraid to make every character themselves and not like Batman, then I think we are going to see some great DC films coming our way. They still need to learn there is a way to have fun and good humor while still having us take the situations the characters are in and the story seriously (like Star Wars: The Force Awakens and the recent X-Men movies, unlike most of the Marvel films). I am sold for the Wonder Woman movie, but let’s see how they do the others. Batman V Superman was good and, more importantly, a good step forward towards great things, especially after the train-wreck that was Man of Steel. But we aren’t quite there yet.

I love Ben Affleck as Batman and visually this film is very engaging, yet the Superman part still lacks for me to fully enjoy it. Objectively, judging it as it’s own movie and keeping my favorite interpretations of these characters out of mind, this is a solid 8/10 and I have no problems re watching this and actually probably will feel like watching this every now and again. I do want to re-watch it, warts and all. It’s an epic, especially this version, and nothing can take that away from it.

Last thing I want to comment on is the R rating. Many of you know that I hated that this was going to be rated R and that I believe these characters (more Superman and Wonder Woman) should not be in an R rated film that takes them away from kids. I stand by that. However, there was nothing in this that stood out to me as to why this version was rated R whereas the Theatrical Cut was PG-13. I seriously don’t get it. They didn’t add anything that wasn’t already on the same tone/level the Theatrical Cut was (violence, swearing, etc). There was some brief nudity, but X-Men Days of Future Past had a similar scene and that was PG-13. So MPAA, what the hell? I don’t understand. This was still PG-13 to me and I’m actually kinda thankful for that.